Seeing your humble venture grow into a multi-million dollar company is every entrepreneur’s dream. The team doubles in size, funding rounds keep getting bigger and it starts to feel like your idea is going to change the world.

But most startup success is owed to a powerfully enchanting and somewhat intangible spirit. Youth, energy, a strong sense of purpose. Late hours fueled by Red Bull and pizza. And yet, all too often, rapidly-growing companies roll in experienced executives and develop new layers of structure. And before long, this soul is broken.

Neglecting the soul of a startup doesn’t only lead to mournful nostalgia over drinks. Creativity can become stifled and a toxic culture can set in. And when a company loses its agility and innovation, it’s only a matter of time before the bottom line begins to suffer.

Generally, the faster a business grows the harder it is to retain its original culture. And in order to scale quickly, businesses certainly require discipline and good management. But investors should be careful not to demolish a startup’s emotional core. Because the reality is that growing too fast can be as dangerous as not growing at all. Pressure to “professionalize” a business too quickly in order to meet market demand can be the very thing that shoots down its chances of long-term success.

What is the soul of a startup?

The soul of a startup comes down to the fusion of a few certain elements, each of which is at risk of being diluted by large-scale investment.

The first one is talent. It takes a special kind of person to spearhead a business venture that solves problems for a significant number of people. Companies in their infancy – at least the ones that attract the attention of investors – usually comprise a handful of “unicorns” performing multiple roles. This results in strong bonds and high levels of respect between everybody contributing to the venture. It’s a prevalence of the entrepreneurial mindset; understanding that hard work and sacrifice is the only way to reach the top.

The next one is energy. Business owners don’t have to worry about paying out overtime when their team is naturally motivated to disrupt. Pulling all-nighters might not be sustainable, but it’s often necessary when you’re trying to bootstrap a revolutionary idea into reality. And working for pleasure becomes woven into the fabric of the culture.

Vision is another powerful driver for early-stage companies. People don’t tend to join startups for the money. They are motivated by a strong sense of purpose, a desire to create a better future. At this stage in a company’s growth, your team is more much likely to be bought into the company’s vision rather than just collecting a paycheck. Naturally, this delivers great benefits to performance.

And the last factor is agility. Startups by nature are relatively small, and therefore much better equipped to deal with change. And change is inevitable for young businesses, which are likely to go through multiple pivots before establishing a position in which to scale. Free of bureaucracy and procedure, startups can react faster and therefore develop a fiercer competitive edge.

With a degree of serendipity bringing together most startup teams, a sort of addictive chaos tends to ensue. Many mistakes are made. But this combination of factors also creates an environment of great freedom to innovate. And that’s why, for many high-calibre professionals, working at a startup is just so much more enjoyable than working for a large enterprise.

When your workforce is both highly-skilled and happy, it can achieve great things in a short space of time. You don’t have to talk about culture, because it’s just there. That’s the soul of a startup.

How do startups change during rapid growth?

As startups begin to face a scale-up, culture has to become somewhat institutionalized. Founders become busier, and without articulating what their culture is and leaving it in their legacy, the soul of the startup begins to vanish. Data suggests that many startups hit a lull in employee happiness in their third or fourth year, when this type of situation is most likely to arise.

Unfortunately, culture is too often sidelined when a company grows quickly. Many investors consider it as an afterthought, and prioritize the establishment of management practices and procedures. These decisions are often driven by an anxiety to capitalize on strong market sentiment. There’s a lack of trust in what the founders have created because it seems almost too chaotic and unstable to handle such growth. It’s a classic case of getting wrapped up in the urgent and overlooking the important.

Many startups also lose their focus on customer experience as they begin to grow rapidly. Loyalty to the customer is critical to the growth of a young startup, but many companies wrongly believe that customers will understand if they go through some “growing pains”. They won’t.

Ultimately, many startups try too hard to scale instead of seeing growth as a natural extension of the work they’ve been doing. By taking their eye off the customer and their culture, the seeds of discord are being sown and will come back to bite hard. The urgency to scale in order to survive is what puts the soul of a startup at risk.

How can the soul of a startup be preserved?

Many growing companies have been successful in preserving their soul, and these tend to be the ones that have gone on to enjoy lasting prosperity. It comes down to dedicating attention to the emotional core on which the startup was built. This requires a great deal of focus on customer experience and company culture – before it’s too late.

Here are some tips for a growing startup to retain its positive spirit.

1. Get to know your startup’s soul.

The first step is in actually understanding what makes your company unique. Think about what bonded your team together in the beginning, and what core values employees are continuing to demonstrate today.

Rolling in ping pong tables and nerf guns because other companies are doing it is not the answer. There’s a reason why your old guard got out of bed in the morning – or didn’t sleep at all – in order to realize your vision. You need to be able to articulate this and run cultural initiatives that keep it alive, even if your team size has dramatically increased.

Revisit your vision. Is this still why you’re in business? If it’s not, you need to decide whether you have moved onto a more powerful cause or have simply lost your way.

Regardless of how you plan to keep your startup’s engine running smoothly, rapid growth means a lot of changes. New hires, new procedures, new projects, and often entirely new ways to work.

The key is to communicate why change is happening, not just what the new policies are. In the clutter of rapid startup growth your team can easily become disenchanted and disengaged. Employees need to believe that management is communicating transparently, and this might mean communicating more than you are used to.

Effective communication comes down to being authentic and accessible. Startup founders should lead by example in order to preserve the culture that they were so successful in creating.

Equally important is communicating what doesn’t change – for example, the company’s vision. Often the founder is still connected with it, but if they aren’t communicating it consistently, teams can become bored or disillusioned.

3. Prioritize the retention of key people – and knowledge.

The departure of a single person, such as a CTO or a CRO, can cripple a young company with a tight-knit core. Remember that the creative environment is what inspires people to work for a startup in the first place, and maintaining this environment might be more important for employee retention than compensation packages.

As a company gets bigger, so too does the need to manage knowledge, particularly if you are faced with high-profile departures. The most important constant in any period of change is knowledge. Because it’s something that you will continue to rely on even once the structure of your company has evolved.

For growing startups, or young companies that have taken large injections of capital, there’s a temptation to roll in top executives with impressive CVs. There’s no question that experience becomes more important when a company grows in size, and that you’ll want the best people on board. However, cultural fit should not be overlooked.

When an employee's attitudes and behaviors are in alignment with your startup's core values, they're working for more than just a paycheck. This, in its essence, is a startup mentality and it protects the positivity and hunger within your culture for years to come.

Stats from Glassdoor show that, to most people, culture and values are more important to their happiness at work than work-life balance or salary. 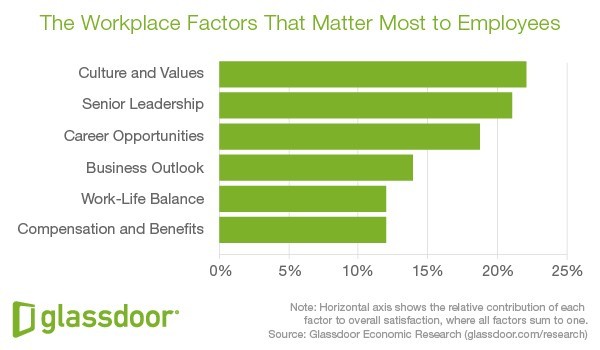 Employee recognition is a cornerstone of effective management. And recognition is rarely an issue for young startups where teams are high-fiving around the same desk. But when companies scale, ensuring that teams feel recognized becomes more of a challenge. Negativity can brew under the surface and remain unidentified until it’s causing problems.

Growing startups should be consistently improving their employee recognition initiatives in order to hold onto top talent and preserve the positive energy in their culture.

Change is necessary for a rapidly-growing startup

Although rapid growth can be a problem, it’s obviously a good problem to have. And there’s absolutely no doubt that rapidly-scaling companies need to introduce and embrace change in order to be successful.

Companies need to employ a comprehensive growth strategy that allows them to effectively manage cash flow and control costs. That means ensuring that structures and procedures are in place, and that they have the managerial competency required to handle the growth.

Identifying which changes are necessary, and which are not, is pivotal to the success of a rapidly-growing company. Often this means subtracting as well as adding, to eliminate waste and move forward from processes that were slowing the company down.

But preserving the soul of a startup is crucial in maintaining the creative spark that fueled its initial success. The key is for companies to strive for balance as they roll out necessary changes. And not to forget about these three critical elements:

By staying true to the powerful cause that bonded the team at the start, companies are better placed to avoid the pitfalls of fast and furious growth.